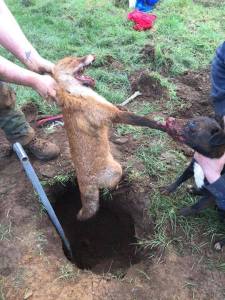 I campaign against fox hunting and also terrier work (which is an integral part of any fox hunt).
We expose the cruelty of terrier work and associated blood sports by sharing images of suffering foxes posted by those who commit these terrible atrocities. I wonder at the kind of men and women who get enjoyment from this. The images we see are extremely distressing but what bothers me even more is just how many men, and some women, get enjoyment from torturing and killing foxes.
The police have no interest in these people so its up to people like me to try to expose this horrible cruelty to the wider world via social media.
Those of our supporters, connected to our page, do get very distressed when viewing these images.  We do get so many disturbing images that even a seasoned campaigner like me can lose sleep at night. Images of a captive fox being held by the scruff of the neck and punched to death, a fox held by its ears as she is being de-socked (flesh removed from her leg) by a dog.  Others being held in cages awaiting a gruesome fate.  A tiny cub being held aloft just before it is about to die.  Foxes dug out and killed, some legally some not, but all are killed for fun (again we have sreen shots). Those committing these acts of cruelty love to pose with the mangled remains of their bloodied victims and then share these vile pictures on Facebook. I find this deeply disturbing, yet we live in a society where cruelty to animals has not only increased, it seems to be tolerated by some, and it is rarely punished. A punishment that does nothing to deter these men and is not worth court time or taxpayers money.
Supporters of our work always question why these animals are not being given any protection, even though many of the atrocities are illegal and I have to tell them that we feel just as frustrated because nobody in authority seems to care.
So where do we go from here?  Do we continue to expose these people and nothing ever gets done or do we try to close our eyes to the cruelty and stop campaigning?  Either way, it’s a tough decision. Giving up is not an option for me but I can see why so many fall by the way-side.
Right now I have a petition up against terrier work that is touching 36,000 supporters, but even when we reach 100,000 I know that nothing will be done to stop these men horrifically torturing and killing foxes –  basically because those in politics don’t really care, after all to most of these people they’re just animals. Well not to me they’re not – if they can feel pain and fear like us then they have as much right to protection from awful abuse as us.
Ordinary people like me don’t often get our voices heard in this country – and especially when folk like me support an end to hunt cruelty.  So I am asking you to please give us a voice to get this terrible barbaric cruelty exposed to the nation, especially now since the ban on fox hunting is under threat. Many of the men in the photos we expose enjoy inflicting the most awful cruelty onto their victims and many of these men support hunt gangs that go out every Saturday so that they can enjoy watching their dogs savage foxes and badgers to death.  God help our wild animals if these men are allowed free reign again!
For myself, I continue to be a victim of the hunt, bullied by hunt members and by horrid men into terrier and lurcher work, who post terrible comments about me. Countryside Capers have a column dedicated to me alone specifically to bully and insult me. Keep Hunting posted stories up about me and displayed comments that I should be hung from a tree, shot and stuck down a fox hole and many others (I have screen shots) but they were never taken seriously by North Wales Police or by the CPS. More recently I saw a comment saying ‘JUDI HEWITT I AM WATCHING YOU’ and the response from one local man in my area replied saying how he would show them where I live. Yet these are the kind of people that get access to guns – I find it terrifying! .
Gun licences seem to handed out like sweets these days and there seem to be lots more people able to get  their hands on them. It appears all you have to do is tell the police that you are pest control and you can obtain a gun licence. I am asking you to help expose the increasingly horrific cruelty to our wild animals by so called terrier and lurcher men. It is these people who hang onto the shirt tails of the mounted hunts.
I have no idea where Cameron’s sly vote is going to lead – will it be to an increasingly hostile world, if that’s possible, or will it eventually work against his hunting friends and bring about a future where compassion for animals is matched by compassion for people?  I hope it will be the latter but I sense while Cameron is still in office our wildlife will continue to suffer in ever increasing numbers.
Judi Hewitt
www.walesagainstanimalcruelty.org.uk