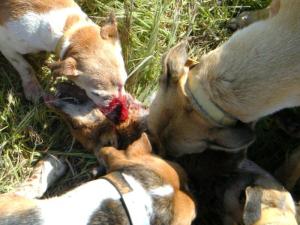 Please Email or write to the SNP MPs to ask them to vote against the amendment to The Hunting Act next Wednesday.

Nicola Sturgeon can be emailed on FirstMinister@Scotland.gsi.gov.uk

The votes of the SNP will determine the outcome.

A debate on English Votes for English Law (EVEL), being held the same day, will give the SNP a dilemma on whether to vote on this piece of English legislation.  However, the timing of the two debates was calculated to prevent the SNP MPs from voting on the amendment to The Hunting Act.  Please ask them not to be put off by the EVEL debate.

The pro-hunters will argue that the change in legislation, to allow an unlimited number of dogs to flush a fox out, will bring the legislation in line with Scottish law.  But monitoring of hunts in Scotland by The League Against Cruel Sports, has shown that this concession in the law has been flouted by those who wish to hunt foxes for sport and therefore the SNP could be looking to tighten up the legislation in Scotland anyway.  So this argument should not be used to put the SNP off voting against the amendment to The Hunting Act next Wednesday.

More than 80% of the British population do not want to see the act amended and are against foxhunting. The governing party only received votes from around 25 per cent of the total electorate, which is hardly a mandate to bring forward a cruel measure opposed by over 80 per cent of voters.

The Animal Interfaith Alliance believes that chasing and tearing apart our beautiful British wildlife for sport has no place in a compassionate society.  It never had a place in the teachings of Buddhism, Christianity, Hinduism, Islam, Jainism, Judaism or Sikhism and we now know, following Pope Francis’ new encyclical, Laudato Si’, it certainly has no place in the teachings of the Catholic church.