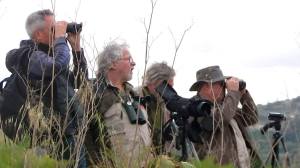 On 12th April a referendum was held in Malta to decide on whether to ban the Spring Hunt, in which thousands of migrating birds are shot by hunters each year as they pass through Malta on their annual migrations.  Chris Fegan, AIA’s Political Education & Campaigns Director and also general secretary of AIA member organisation, Catholic Concern for Animals, attended the referendum in Malta, along with staff from the League Against Cruel Sports and their patron, Bill Oddie.  The League and CCA have been campaigning to ban this ‘sport’ and had raised enough signatures on a petition in Malta to require a referendum.

AIA strongly opposes the hunting of these beautiful migrating birds and is extremely disappointed in the result of the referendum.  We will continue to support Catholic Concern for Animals and The League in opposing this cruel, pointless and barbaric activity.