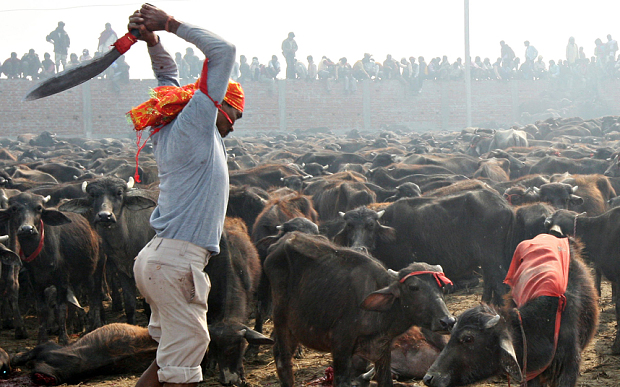 Most of the animal sacrifices are due to take place on the 4th and 5th
of December.

The Government of Nepal has issued an appeal to discourage animal
sacrifice at the festival, as have the Mahagadhimai municipality.
Pilgrims are being encouraged to make alternative offerings to the
Goddess such as fruits, money and precious metals. A large number of
the devotees come from India and it is encouraging that the Indian
government has disallowed the transportation of live animals into Nepal
for the purpose of the festival, which may reduce the number of animals
sacrificed.

In recent days, the Gadhimai temple committee have also taken some steps
to discourage animal sacrifice:

1. Pigeon sacrifice will not be allowed
2. Pilgrims are being encouraged to make monetary donations to the
temple instead
3. The temple committee have agreed to support any kind of awareness
programs led by animal welfare groups
4. Religious ceremonies will be held at the temple to discourage animal
sacrifice
5. Animals will be categorized according to their age and animals below
the age of 2 years will not be sacrificed

It remains to be seen how much of this will be put into practice. Nepali
Animal Welfare organizations and activists have been working
relentlessly and will continue to do so to discourage this practice by
working closely with the local communities, through advocacy and
outreach.

There will be more news to come soon from Animal Nepal.