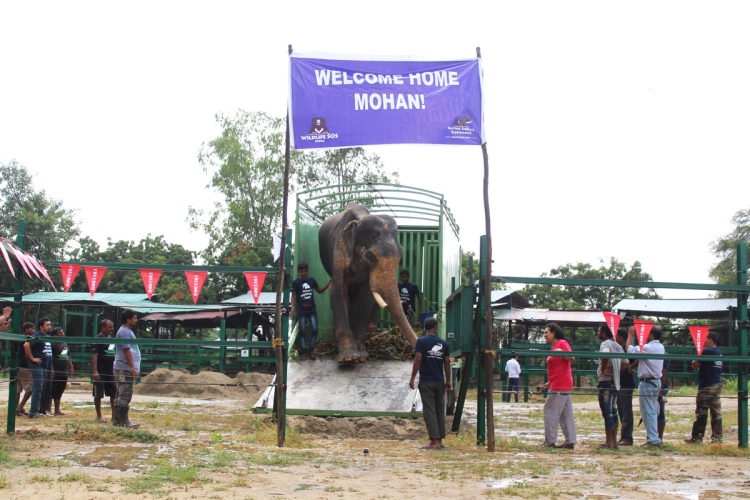 Wildlife SOS helps rescue elephant that was abused and shackled for over 50 years!

In what was one of the most dangerous and emotionally charged rescue operations of the decade, an elephant that was shackled for over 50 years and continuously abused by his captors was finally rescued by Wildlife SOS after a persistent effort of over two years to win him freedom.

The 55 year old elephant named ‘Mohan’ was poached from the wild as a calf, separated from his herd and his family. He was tied up and beaten to break his spirit ( a practice that renders an elephant trainable) after which he was sold off to be used as a begging elephant. He spent the majority of his time in the villages near Lucknow, where he walked the streets begging for money or begging outside temples or hired out to be used for wedding ceremonies. The severe scars and puncture wounds on his body and his emaciated condition confirm the extensive torture and neglect he has endured over the years.

Wildlife SOS has been trying to rescue this suffering elephant since July 2014 when they had rescued ‘Raju’ another elephant who had suffered for decades. Raju elephant cried for joy when he was rescued. Both elephants Raju and Mohan had suffered endlessly for over a century in combined years. And for a few of those years, they languished side by side, only a trunk’s length away from one another. Eventually Raju was moved to a different city separating the two elephants. The fact that they were chained together at a trunk’s length away from one another makes them brothers in pain and each was the other’s only witness to the suffering and brutality they endured.

Repeated attempts by law enforcement, forest department, Police and Wildlife SOS to rescue the elephant were met with hostile and violent local mobs, as well as more than 20 disheartening delays in court proceedings. Mohan earned the title of “unluckiest elephant in the world.”

Then, in early September a sympathetic Bench at the Lucknow High Court took note of Mohan’s deteriorating health condition and the years of unimaginable cruelty meted out to him by his owners and finally issued directive that the elephant be shifted forthwith to the Elephant Care Center in Mathura run by Wildlife SOS where he could be provided long term medical treatment and life time care as the specialised treatment required by the elephant was available here. After suffering for over 50 years, Mohan elephant has finally arrived at his new home, the Elephant Conservation and Care Centre in Mathura in an elephant ambulance.

Kartick Satyanarayan, Co-founder Wildlife SOS, said, “We appreciate the compassionate approach of the Lucknow High Court Bench who recognized the deteriorating condition of the elephant and issued necessary remedial orders to ensure his safety. The Elephant Conservation and Care Centre in Mathura has necessary facilities and a dedicated team of veterinarians and elephant care staff who can provide this elephant the care that he deserves. In addition to veterinary care, Mohan will also have the freedom to roam free in a large spacious enclosure and be fed healthy and nutritious fodder, fruit and vegetables and also have other elephants to socialise with to ensure his overall physical and psychological recovery in his new home.

Dr. Yaduraj Khadpekar, Elephant Veterinarian of Wildlife SOS, said, “The elephant is severely emaciated due to severe malnutrition and neglect. The digestive system has been severely compromised by worm infestation. His body is covered in wounds and his liver functioning is severely affected. With access to proper diagnostic and treatment equipment along with water baths, pools for hydrotherapy and a staff of full time veterinarians that are already charting out a diet and treatment plan for Mohan, we are hopeful for his speedy recovery.

Geeta Seshamani, Co-founder of Wildlife SOS, said, “It is with immense joy that we welcome Mohan to the Elephant Care Center. His freedom has been a long-time coming, and we are so grateful to everyone who stood strong through this long and often disheartening and dangerous fight for his freedom. This day really validates all the hard work that went in to his rescue, and we hope it sets a much-needed precedent for other captive elephants in India that animal abuse will not be tolerated.”